What is happening to the price of electricity?

The price of electricity reaches a new annual maximum. 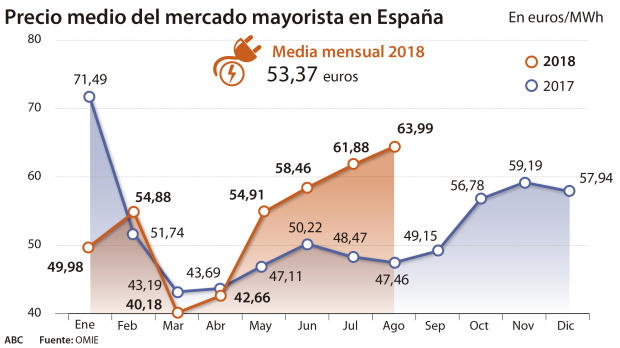 In August, the average was € 63.99 per MWh (The second most expensive one month in the last 10 years) with an increase of 35% over August last year.

Why does the price of electricity go up?

Due to the lack of water and wind (for renewable energies), which results in the greater use of coal, whose production of electricity is more expensive, due to its high pollutant character

Therefore, we are experiencing a process of decarbonization in Europe, so it will not be difficult to foresee that, gradually, coal plants will be dismantled and, in parallel, renewable energies (especially wind and solar) will be winning land, since by changing the regulations, the new renewable plants have begun to be carried out by auctions and have changed their business model.

To finance themselves, they have opted for long-term energy sales contracts, known as PPA (Power Purchase Agreement), for an average of 10 years. Both parties derive advantages from this model: one party secures its income, while the other party fixes its electricity supply costs.

What will happen in the future with the price of electricity?

Fortunately for consumers, the increase in the price of electricity in the wholesale market will not fully affect the electricity bill, since 60% of the total amount is cost unrelated to electricity consumption, such as transport, distribution, taxes, power, etc.

What is clear is that we are moving towards a single European energy market.

But at the national level, it will be fundamental to have a general consensus for the new energy plan, which will indicate where we are going. Legislative stability will be critical to consolidate international and investor confidence, which in turn will influence, of course, the stability of the market and the final price of electricity.